You have probably gathered that Fozzie's greatest remaining training challenge is his overexcitement on leash when he is exposed to things in the outside world, coupled with his frustration at being restrained from meeting those things. What usually results is a spirited game of leash tug of war to which his foster mom is not a willing party, and which only ends when I grab him by the harness and give him a brimstone-laced Sit! 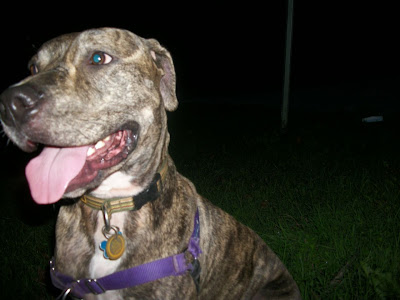 Lately I've been making a concerted effort to work on this by taking him to environments that are likely to be stimulating and allowing him to practice being calm. The other night, I took all 3 dogs for a walk together along a trail near us. Not the most brilliant way to practice being calm, though I must say that even then, as long as I had my cheesy snacks, I was getting nice sits out of Sandy whenever I asked for them, and even Fozzie would tune in as long as there was nothing tooo exciting going on. 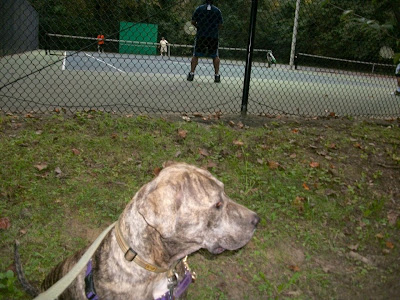 After our walk, I wanted to take Fozzie alone a bit so we could work on just calmly observing the environment and refraining from acting out. The perfect opportunity presented itself when I realized we were parked right next to a tennis court.

There were a bunch of men on the courts running around, jumping, grunting, hitting balls, and talking loudly. There were a few guys lounging on the benches outside, talking loudly to friends as they showed up. Watching all that, who wouldn't get excited? 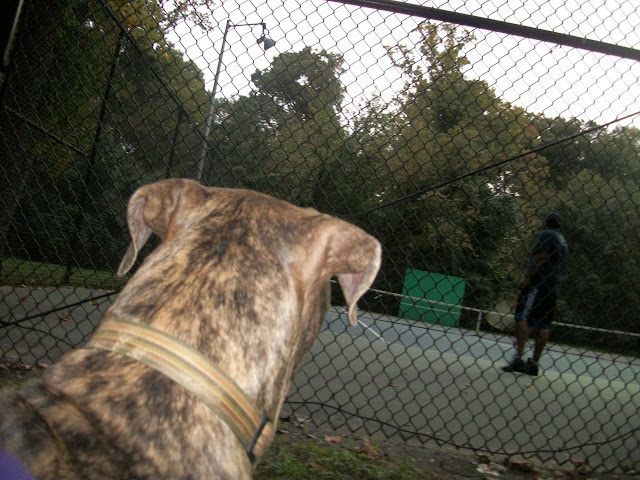 So we put the other dogs in the van, and Fozzie and I just watched. He did perfect Sits and Watch Mes in exchange for cheesy snacks as the guys ran, grunted, and talked loudly. I explained to one of the guys outside the courts what we were doing, and when we got closer to him, Fozzie gave his leash that Look like he wanted to grab it so bad, but I was present enough to issue a quick Sit! and an equally quick cheesy snack when he did.

An aside: the man was intrigued when I brought out the clicker, and started talking about that show on Animal Planet! He said how incredible it was what the lady was able to do with a clicker and all sorts of dogs. For all the times I've heard people talk about that OTHER TV dog trainer in passing, this was the first to mention Victoria Stillwell. Yay! 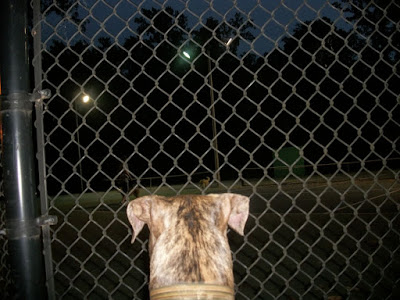 In any case, I was so proud to be with my big bully man and to have him sitting so nicely in a challenging environment for him. Way more proud than the time recently I was walking all 3 dogs and a passerby said something to me, and Fozzie AND Sandy both started furiously tugging on their leashes, and there I was on a busy street grabbing at their collars and yanking them away from each other and cursing a mile a minute. I know, brilliant. Roll up that newspaper and gimme a good smash.

It's really not rocket science. Its a matter of getting out and practicing frequently, with just Fozzie. Maybe he really would make progress if I could just do this consistently.