foster failure in the making 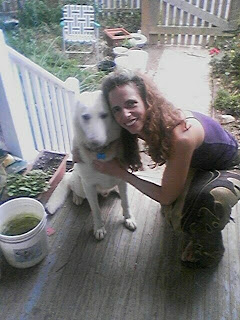 Lars went to his prospective adopter's house yesterday, but is back with me now. It was just too much to process for the sweet little freshly-neutered man, and he seems happy to be back. So we are going to let him mellow out here with his buddy Fozzie for a while, let his poor beleaguered scrotum heal up with hot compresses every day, and take our time with this adoption.


I wasn't really ready to let go of him anyway:)


Somehow the shepherd noses grab at me with a unique intensity--that silly sideways smile that they do when they sniff something or when they are being affectionate. He will make a handsome sweetie to some lucky adopter!


As for me, I can't say its the first nose that's affected me profoundly, nor will it be the last. Gotta keep that revolving door of foster dogs rolling....
By Kirsten (peacefuldog) at May 30, 2010 No comments:

Email ThisBlogThis!Share to TwitterShare to FacebookShare to Pinterest
Labels: Lars, Why foster? 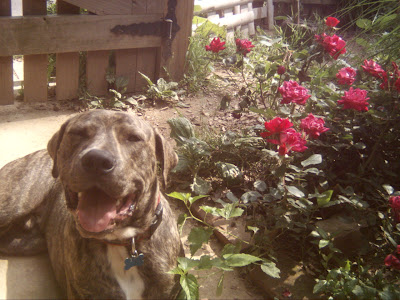 Fozzie has been pretty good about not destroying the garden, though he does have a knack for getting into "restricted" areas. Now he gets to enjoy the fruits of his self-restraint.


Today we met Jana, a wonderful prospective adopter for Lars. Lars seemed immediately comfortable with her and her niece. 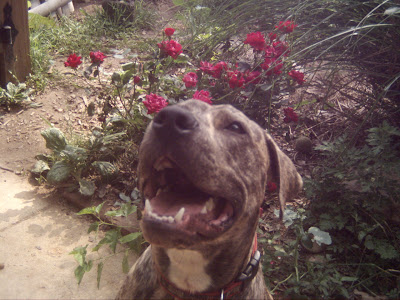 These boys have come a long way--Lars in confidence and Fozzie in ability to mellow out!
By Kirsten (peacefuldog) at May 21, 2010 No comments:

Email ThisBlogThis!Share to TwitterShare to FacebookShare to Pinterest
Labels: Fozzie, home and garden

Lars came through his neutering unscathed, and with his blossoming sweetness none the worse for wear. He is becoming just your regular, happy dog, at least with me--wiggling, cuddling, diving into my arms for a big bear hug, flopping over onto his back and playfully mouthing my arms. He is also getting warmer with other people--sniffing, taking snacks gently. It is going to be hard to let this one go! Shy dogs are so rewarding when they start coming around. 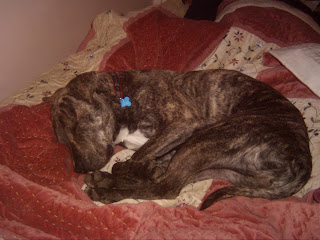 He is making me appreciate Fozzie more too. I have realized what a soft mouth Fozzie has, and despite his excitability and capacity for arousal, how reliable he is. The way he sprawls out at the foot of the bed when we're watching a movie or going to sleep, the way we can drape our legs over him or fall asleep completely wrapped around him and he loves it.


Multiple dogs are also a great motivator for Lars to eat--I can get him to eat dry food almost always when I go outside with a handful of it, and feed Lars and Fozzie by hand. I guess Lars figures that if Fozzie's enjoying it, he'd better get in on it too! The rest of the time, its a vegan's nightmare for Lars...cheese, cows milk, huevos, bacon, anything fat. He'll be a roly poly family dog like the rest of mine before I'm done with him.
By Kirsten (peacefuldog) at May 21, 2010 No comments:

Lars is really coming around. He now loves to sit in my lap and to roll over on his back for a belly rub. He wiggles joyfully when I come home and sleeps calmly through the night in my living room. He had a bath last week, his rabies shot and heartworm test the other day, and did great--and will get neutered Wednesday! He is starting to have positive interactions with people besides me too...lies at Florian's feet when he works on his computer, nuzzled Karin's hand gently when she came over to give him his distemper shot tonight.
By Kirsten (peacefuldog) at May 16, 2010 No comments: 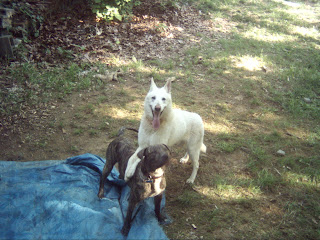 These guys have been going nonstop. Nappy time!
By Kirsten (peacefuldog) at May 07, 2010 No comments: 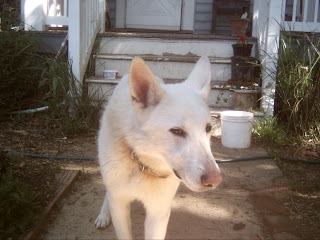 is his name. Handsome and brave.

This morning, I was able to hold his head with one hand under it, scratching his chin, the other hand scratching his ears and the top of his head. He wagged softly. He let me brush him while he ate his food, and then I even lifted his paws to see why he limps a bit--the centers of his front paw pads are worn down and bleeding, I think just from being on the run so long! Poor little thing.

Email ThisBlogThis!Share to TwitterShare to FacebookShare to Pinterest
Labels: Why foster?

So the new white shepherd is doing better every day, but I still feel that I am not trainer or manager enough to handle having him inside--three big males, one of them unneutered and unknown--is bigger than me! I know being in my yard and on my porch is an improvement to being at large and at risk of being hit by a car, etc., but it still breaks my heart to have him out there, everybody else in here, and him squeaking away and wanting to come in! The few times I have let him in, Lamar and Tashi did not stop growling, he did not stop humping Fozzie, and I can't even imagine what the budgies thought of it. I still can't get a leash on him easily, didn't want to drag him inside and in 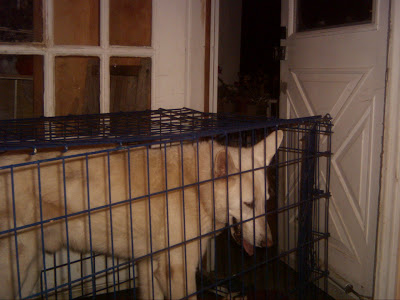 to the crate--so what to do?


The crate is just inside the door, with the crate door open to the outside and positioned so he can't sneak into the house around the crate opening. He can see in, get an idea for what a household is like, and not feel excluded, I can get him used to a crate with lots of hot dogs, and the other dogs can get used to him without danger of being humped!
By Kirsten (peacefuldog) at May 06, 2010 No comments:

Today my new friend allowed me to scratch his chin and neck, loop a leash around him, and lead him to the van for a ride. He was great in the car, just relaxed behind my seat. He's clearly had an owner, and maybe not such a bad one!
By Kirsten (peacefuldog) at May 05, 2010 No comments: 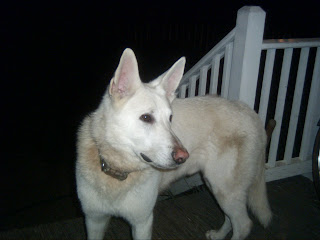 Tonight, Fozzie brought home a boyfriend. This dog is now in my yard with Fozzie, humping and playing and rolling around, both of them having a blast. Where did he come from? Whose is he? I don't know, and I think its a long time since he's seen them--this dog is skin and bones. Scared to come near me but came close enough to eat the hot dog I tossed his way, before backing off again.
By Kirsten (peacefuldog) at May 04, 2010 No comments: