Not to call undue attention to myself or anything, but today was my birthday! It was epic.

First off, waking up next to my beloved people, the furry ones and the Swiss one, and being showered with joyful hippie gifts--tie dyes and lip balm and hippie parfum and all my favorite things in the world. Then, a birthday text from my sister and a note that she'd bring Princess Sky over for the day, as she often does on Wednesdays.

My little Princess came crashing into the yard, exploding love all over the place. Then she zoomed around the back yard while I pulled a few weeds, zoomed up the steps and down half a dozen times, wrestled with Dahlia, ate Fozzie and Dahlia's food, and let Dahlia hump her for a few minutes.


Pretty soon it was time to load up Fozzie and Dahlia and leave Princess here to make out with Florian, which was a good set up for everyone involved. Uncle Johnny needed to go to Baltimore for a doctor's appointment, and I wanted to go on a hike with my dogs, so let's combine those activities for fun all around. 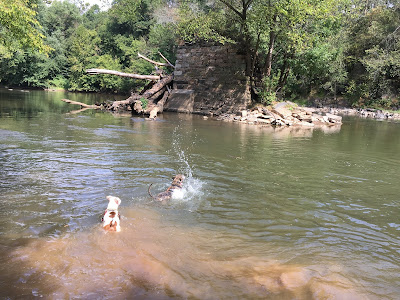 Not 10 minutes from where I left Johnny is Patapsco State Park. Where the dogs and I unloaded, walked right down to the water, and had the best time ever.
Walked in the stream, which was cool and fresh (like certain noses), tossed sticks for the dogs, watched them splash around. 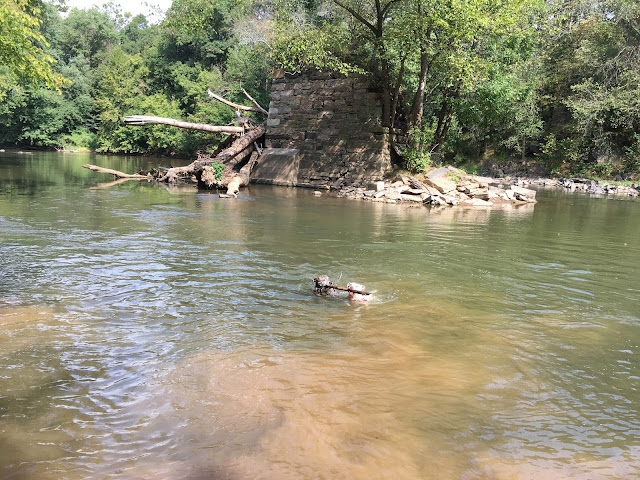 Left the phone in the car, so these pictures are not from Patapsco, but from Sunday's hike to the Monocacy River, which was also epic. 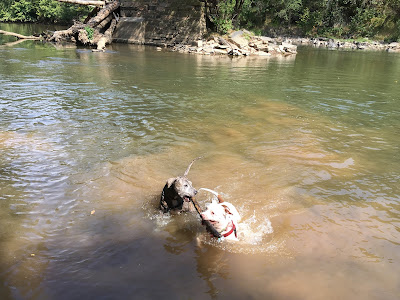 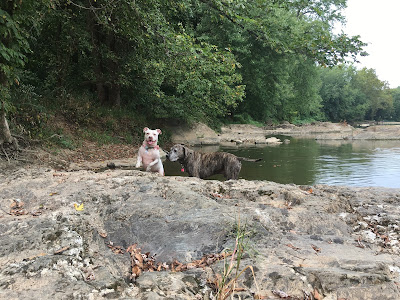 Because in the end, what else is there?


When you have two wet dogs, sloshing around, arguing over a stick, everything else kind of just falls away. 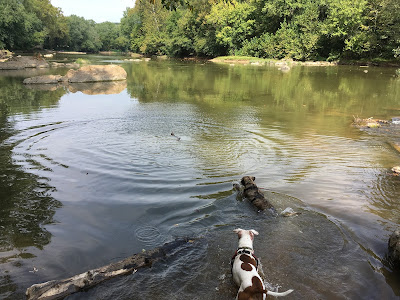 And you are left with pure bliss.


On this hike I couldn't take pictures, couldn't check the time, wasn't distracted by technology or compulsive iphone brain. 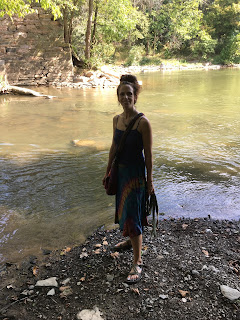 Just me, the dogs, the cool water, the warm air, the green vegetation.

And a lot of really good sticks.

After sloshing around for a while, letting Dahlia get nice and clean then come out and roll ecstatically on her back in the dirt, then dragging her back to the water to rinse and holding her by the harness as we walked back to the car so she wouldn't do the roll thing again, back to the car. 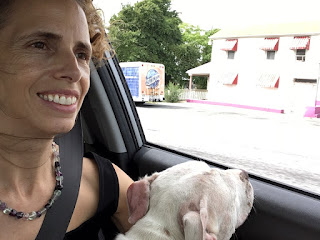 And a short drive to pick up Johnny, with Dahlia on my lap and taking selfies, Because fuck it. It's my birthday.

Then home to eat half a pineapple, do some online planning of the revolution, and receive mindblowing kisses and cuddles from Princess and my two tired, happy dogs. And then dinner with my sweetie and rest time for the short people.

Wouldn't have done anything different.
By Kirsten (peacefuldog) at September 21, 2016 6 comments:

Staying Close to Home for a Far-Out trip...to Vermont

Well this has not been the easiest summer. But it did contain some intervals of peace and joy, and things seem to be on a better track now. After a stressful July, Florian and I rewarded ourselves with a summer road trip to Vermont, which we knew would be an amazing and slightly cooler place to take the dogs.

Our intention was to camp, explore the extensive national forests and parks, and discover a lot of trails and swimming holes. Of which there were no shortage!

The first place we stopped was this gorgeous creek in the southern part of the Green Mountain National Forest. 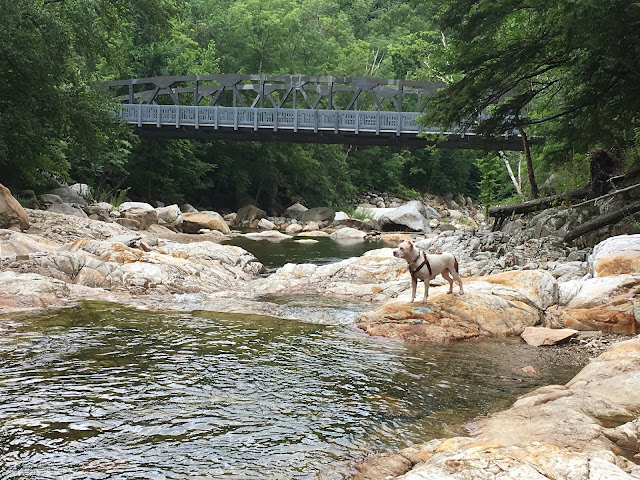 Amazing white rocks and heaven for the dogs as although Vermont was cooler than Maryland, it was still pretty hot. 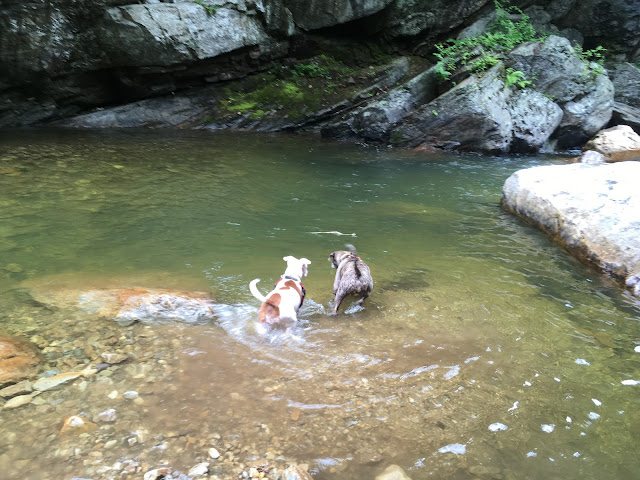 Our entire week-long vacation consisted of driving around the state and stopping wherever we saw a cool trail, stream, or ski area worthy of exploring, some interesting rocks, a public campground, or a nifty little town with a General Store that sold maple syrup and local beers. 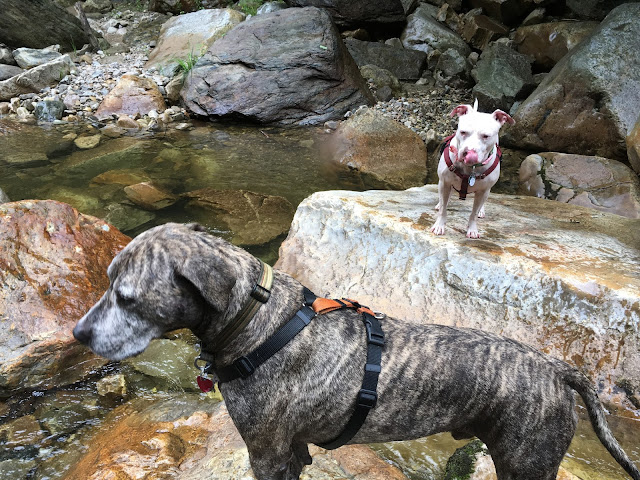 There were a few great surprises, like this Spirit in Nature Interfaith Path Sanctuary in the Green Mountains. We happened upon it when driving out the dirt road from our campground our first night in Vermont, and took some time to walk on the Buddhist, Pagan, Interfaith, and Druid paths 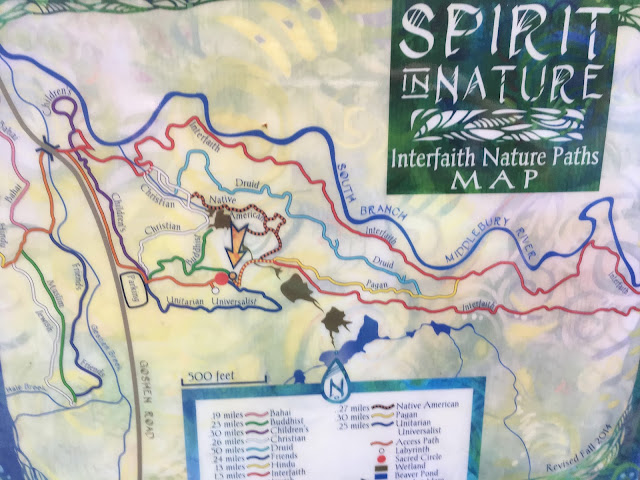 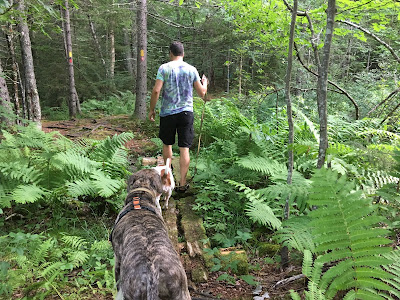 which were beautifully laid out through a magical forest 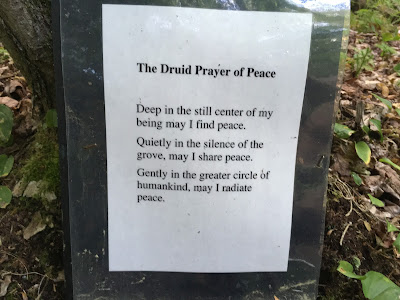 and each of which had signs to remind you of the gifts of inner peace and reflection brought by each of the great spiritual traditions.


It is amazing how seeing such things, and especially being reminded of them in such a beautiful setting, can instantly bring about a state of well-being and joy. I think even the dogs felt it. 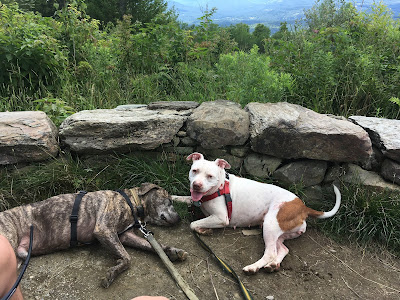 When we passed a ski area, 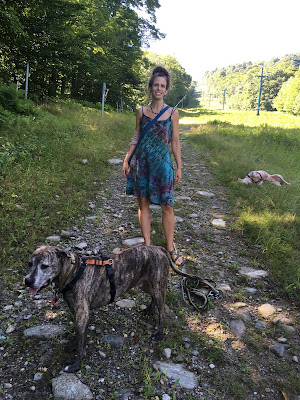 Florian insisted we check t out and it was a good thing! It turned out to be a great place for the dogs to run around.


Of course in the summer it was totally empty, and there were some amazing views 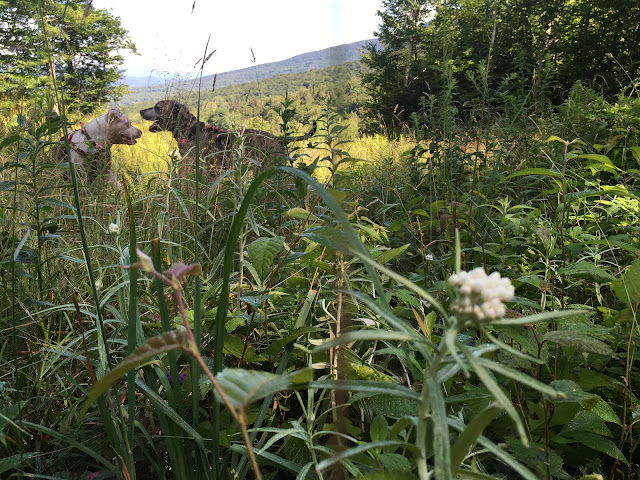 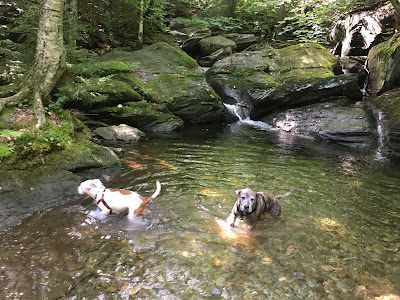 and even a stream at the bottom where everyone could cool off.

It was a bit challenging to do city and shopping visits since we had the dogs and it was hot. But we did check out Burlington, and even there found attractions for everyone to enjoy 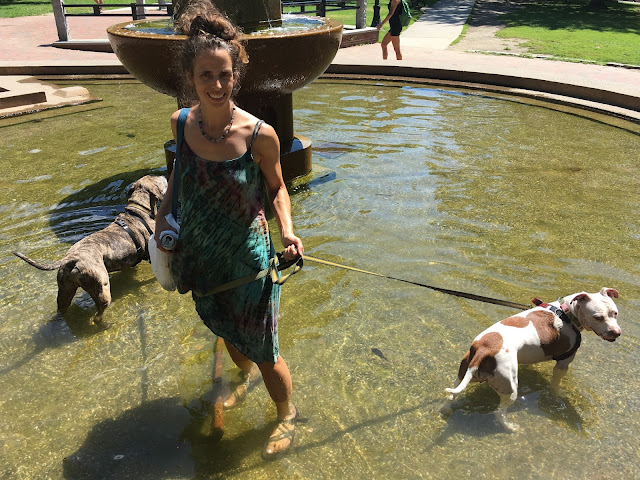 My favorite camping spot was one that we got to well after dark, after the one we wanted to stay in, Smuggler's Notch Campground near Stowe, was full. We drove around looking for another place, checked out a couple of overpriced, kind of smarmy private campgrounds, almost ran out of gas, 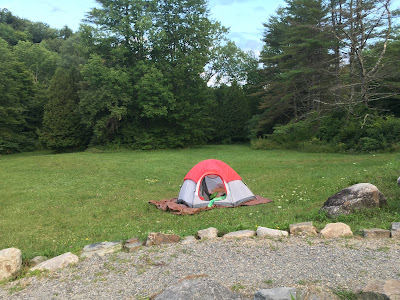 and finally, on a dirt road in the middle of the forest, saw a clearing and a place to pull off.


We woke up to a display of flowers and a stream to freshen up in, 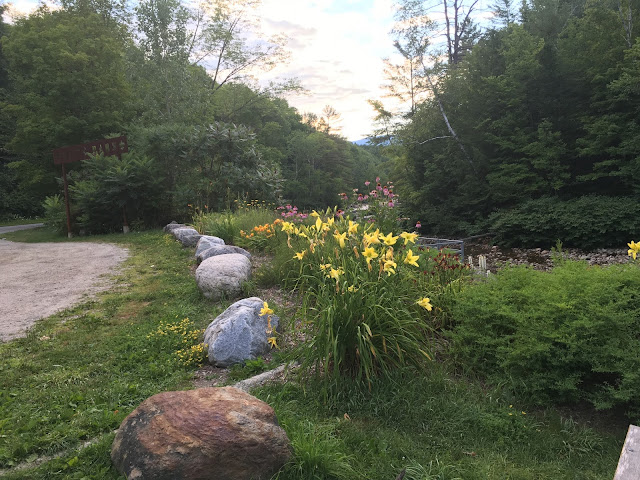 and a nice picnic table where we could eat breakfast and relax. 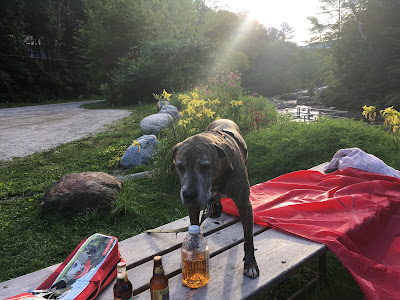 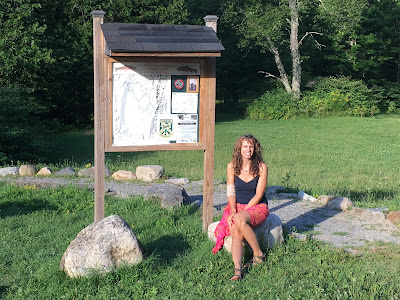 
Also loved Warren Falls, another gorgeous creek where the water had carved out these deep potholes 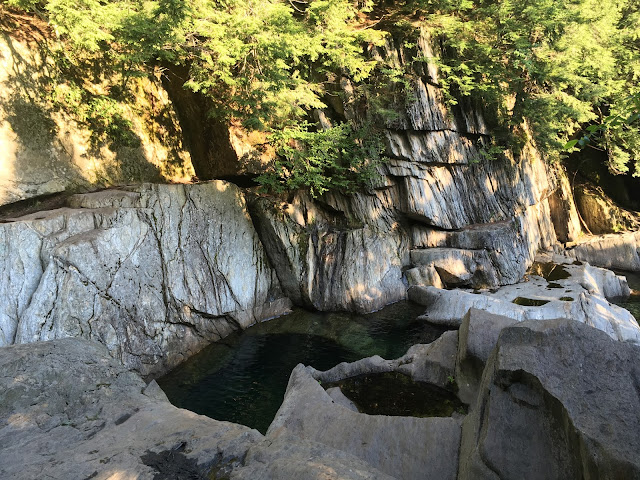 Magical! But we were there in the morning, so it wasn't hot enough yet to swim... 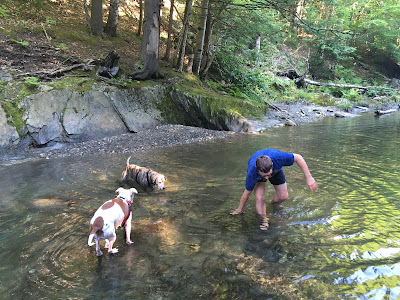 at least not for the humans
Fortunately, later we came upon our own private lake where there was no one, and we got to have an amazing swim 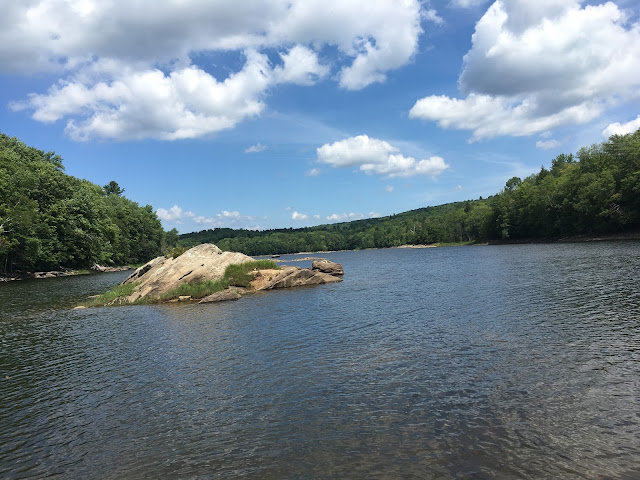 As you might imagine, after about 6 days of this we were satisfied and a bit tired.  Fortunately Florian bought a queen-size inflatable mattress about halfway through our trip so we could rest in comfort, and the dogs could too. 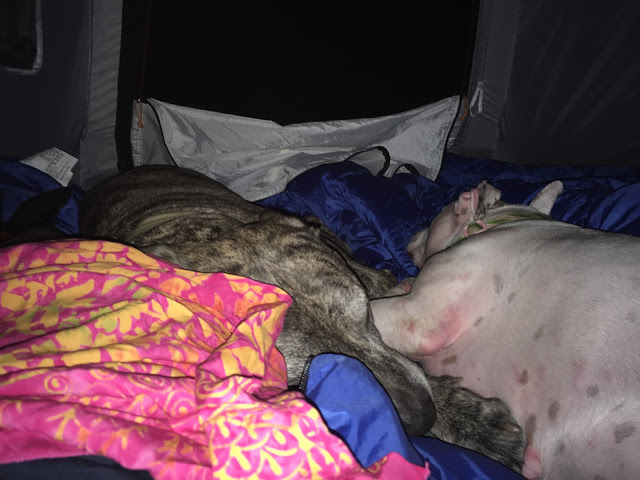