Like a good neophyte dog trainer, I am subscribed to a slew of positive training listserves and they are an absolute superhighway to enlightenment on all things dog training. Recently I posted a question about Fozzie, in the hopes of making him even more adoptable (as if a tongue kissing cuddle muffin is not adoptable enough.) Here's my question:
I wonder if anyone on this list might have ideas about my adolescent pit bull/presa canario (or something) foster dog, who has been with me about 8 months.
He was about to be euthed at the shelter (failed his eval, probably because of his high arousal/play drive) and in the end he's been the best education I could have asked for as a trainer who is relatively new to the art. He has made great progress in impulse control through waiting at doorways and for meals and snacks, sitting and making eye contact before I throw his ball, and some of the on-off switch and other impulse control games in Control Unleashed and elsewhere. He is a brilliant learner of tricks and skills and one of the most affectionate dogs I have ever met.
The main continuing struggle is on-leash. He becomes a lunging, barking, yodeling, wheezing, squeaking madman when he sees another dog, which is no mild event since he is 65 pounds of pure muscle. On those occasions when he has been allowed to approach another dog, he greeted with wags, play bows, and sniffs, which then became rowdy, pushy playing. He is for the most part good with my own two dogs, though sometimes a bit pushy, and he's just such a strong beast that I don't feel confident about allowing him to greet other dogs on-leash....I would rather he learn to calmly accept their presence and move on.
Would you call this leash reactivity, even though a lot of it is play excitement? I have also wondered if his prey drive is contributing, as his is over the top (he smashes from side to side against the windows of my van if not held firmly when we are driving, trying to eat passing cars).
I have tried to find that "magic spot" at which he notices the other beast but is not yet freaking out about it, but I am not sure if that spot exists for him. He can reorient to me during non-stimulating times on walks, but the moment he becomes aware that there might be a dog somewhere around, he becomes that sniffing, wheezing madman who couldn't care less about snacks. There is almost something hound-y about his indifference when we're on walks....when in a training session in house or yard he is your textbook biddable pit bull, but outside he reminds me of the plott hound foster I once had--all nose to the ground.
I got several helpful responses, but the most helpful was the following, from Douglas St. Clair:
You got a great sort of dog there. The Pit bull, as you can clearly see, has a bad rap. They were the most popular dogs in America back between WW I and WW II. If you have seen Little Rascals films their dog was a Pit, but back to your post.
I'll bet he wants to touch, lean on, and be physically close to you more than any other dog ....
These dogs IMO are in every way physical. Just as they want to be physically near members of their family they want to play physically with toys and other dogs.
...these dogs are poor at projecting calming signals to other dogs. I have trained my dog to go behind me and sit when we are about to meet a new dog.' 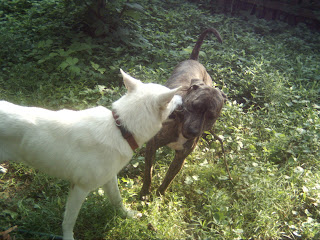 ....First consider a Border Collie and our dogs. A BC is as supple as a rope. Our dogs are as supple as a log. The differences in their build translate into differences in overall movement. Should two aggressive BCs approach one another their bodies stiffen. Does the natural stiffness of our dogs look to them like a dog who is approaching for a fight? I don't know, but I do know that our sort of dog is sometimes surprised by the truly aggressive approach of other dogs.


...Having a dog sit behind [the handler] addresses that possibility five ways. First it calms your own dog to sit our down. Secondly it sends a calming signal to the approaching dog. Thirdly it positions you between the two dogs and the person who takes this posture is also assuming responsibility for the one behind them both in the eyes of their dog and the dog who is approaching. Fourth s/he can see you and see if you are tense or relaxed. When your dog is in front of you there is no way for them to see your reaction to the situation without looking away from what may be a threat to both of you. Fifth If s/he is in front, taking responsibility for both of you, then s/he is going to be more tense.
...For reasons I can't explain I think the dog finds the leash frustrating in general. Tolerable but always at least a little frustrating. When another dog approaches this frustration is increased. So if as you say the dog is initially excited then frustrated by the leash the manner in which s/he addresses the other dog is going to reflect all this. I also think that the presence of the leash makes 'talking' with the new dog a little like trying to great a new person while someone is holding your tongue. Need I describe your reaction for you? :)
I thought this was such a great synopsis of the pit bull--highly physical, quick to arouse, easily frustrated, perhaps poor communicators because of it. But thoroughly affectionate and so loving.
Fozzie is definitely frustrated by the leash and it will take some more practice over time of giving him tasty snacks and making the leash way more rewarding.
The "Go behind me and sit" trick when another dog is coming will take some work--Fozzie is now so excited when he sees another dog way  in the distance, that a sit may be too much to ask as he waits for the other pooch to approach--but it's a great idea for less excited dogs.
For Fozzie, I think I need to work with a  friend and another dog as we approach each other slowly, doing lots of treats and T-Touch. Or maybe Premack: click and allow wild tug of war with a rope toy in exchange for looking at me while another dog approaches? Would have to be at a distance.
Fozzie reminds me of a little kid--those floppy ears, the deep eye contact, the wild energy juxtaposed with a deep desire for approval and affection.
By Kirsten (peacefuldog) at August 26, 2010 No comments:

Our recent trip to Switzerland to visit Florian's family held an unexpected joy--getting to assist in a dog training class! 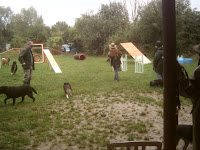 Katia Pillonel teaches right next to Florian's parents' house outside Geneva, in Puplinge. We went by there one day and she invited us to come back for her classes the next two Sundays, and her classes were such a delight.
Not surprisingly, the Swiss seem much more progressive in their dog training than we are, overall. There wasn't an active emphasis on the fact that they were doing positive training, it was just the way things were done. When I asked Katia--the one in the cowboy hat --whether there was any correction training in Switzerland, she seemed to indicate that reward-based training is just the way everyone does it. 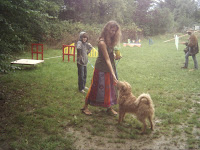 The class was so joyful--happy chiens just ranging about off-leash, their people leading them in training games like Freestyle dance, Musical weaving among chairs, Wait until your owner counts to Trois (even if s/he counts to un, deux, quatre, neuf, sept first) before coming to get the treat, and Find the Key Hidden in the Box. Katia had me demonstrate Heel with eye contact with one of her chiens, and was impressed with how the pooch and I gazed lovingly into one anothers' eyes. I was also very happy to advise one student on helping her shy shepherd mix by working on touch targeting and getting her to touch non-threatening parts of new people's bodies--a kneecap, a foot--with her nose, then lavishing her with treats.
By Kirsten (peacefuldog) at August 24, 2010 No comments: