the doggie pool gets some use 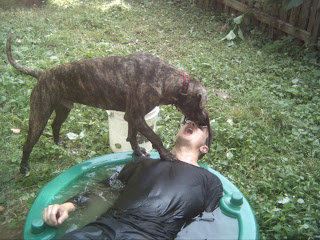 Florian finally got around to weed whacking the entire yard--fun for the whole family, especially Fozzie!
By Kirsten (peacefuldog) at July 24, 2010 No comments:

Email ThisBlogThis!Share to TwitterShare to FacebookShare to Pinterest
Labels: Fozzie 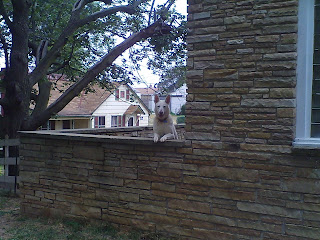 I was continuing to get applications for Lars from his petfinder ad, and told Roy I would follow up with them, that I wouldn't leave Lars with him too much longer, didn't want to trouble him, etc, but Roy did not seem too troubled. Finally, he said he was going to just keep the guy. Apparently Lars and his new buddy Walker are inseparable, and even the older dogs in the house seem happy with Lars around. 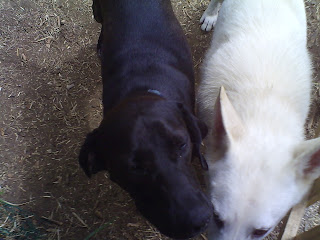 This is truly a happy ending for a boy who was alone and scared for who knows how long, and who just wanted companionship with people and dogs who would love him and accept him. Thanks to Roy and Karin for helping turn his life around!
By Kirsten (peacefuldog) at July 23, 2010 No comments:

This past weekend, we went to the Adirondacks to visit with my parents and rather than bring all 4 dogs to spend a few days with Mom, Dad, and their dreadlocked, ill-tempered, and testy Bergamasco, we left Fozzie at boarding and brought Lars to Karin's small sanctuary in Hagerstown. The poor guy was anxious when we left him and apparently stared at the fence for 20 minutes after we left. But since then, he's been doing fantastic!
Here is the update from Roy, the infinitely kind, calm, Buddhalike caretaker of the sanctuary:
Saturday: "Lars played with Walker [resident black lab mix] all night. Up and down the stairs till about 3:00 am. He seems to be having a blast. He follows me wherever I go and has been very friendly. I don't need a leash with him, he seems to listen very well."
Monday: "Lars is doing fantastic. He did have a ton of energy. They were standing on their hind legs Sumo Wrestling for the better part of the day, yesterday. I took him down to the creek last night and this afternoon for a walk along the canal. He follows very nicely, unlike Walker. They are both pretty much puckered out now. Walker was snoring so loud last night I had to put him downstairs so we all could sleep. Lars seems to be getting sweeter by the day. He looks like a Polar Bear."
Thursday: "Yes he is doing fantastic. He loves to play, and I think it takes him a little while to feel comfortable. His playfulness could be misunderstood by another dog as aggression, but I think it is just his way of getting to know you. Fortunately Walker takes nothing personal and they became immediate best friends. ...Now they are trying to fit the other ones whole head into their mouth, all I can do is laugh. I would look for [an adopter] that is very active or likes long walks."
So proud of my boy!
Meanwhile, Fozzie is just mellowing into an entirely different dog from the one I rescued in February. No more out of control excitement on the leash, no more zany wild uncontrollable arousal during play sessions in the yard. A regular poster child for the effectiveness of impulse control work.
But I really feel that more than anything, what's helped Fozzie is a lot of love and stability. We've done a fair amount of training but what we've done most is just love him. Lots of cuddling, some T-touch, sleeping in bed with us, and showering him with kisses whenever we get the chance. Sometimes that's just what a dog needs to feel more calm and confident and settle down.
To think that this precious thing was on death row! It really gives you insight into the temperament testing system that was used to justify killing this creature, wherein an animal, already stressed from being dumped off at an unfamiliar place with loud noises and the sights and smells of hundreds of other stressed out animals, is given one life-or-death chance to behave calm and well-adjusted, even when prodded with very stress-inducing intrusions like having a plastic hand shoved in its face while it is hungry and trying to gulp down a quick meal.
I am so glad Fozzie made it out of that system. He is by far the most affectionate foster dog I've ever had and an incredibly intelligent, sensitive, wonderful family dog.
By Kirsten (peacefuldog) at July 16, 2010 No comments:

We had a good reminder the other day to work with dogs at a level at which they can succeed.
Lars had been doing so well with meeting new people calmly and accepting treats, so I decided to take him to an adoption event, along with Fozzie. It was too much for both of them! Fozzie lay calmly through most of it, but barked excitedly a few times, and Lars was just spooked and anxious.
I was worried I'd given both of them a real setback, but we've been working hard on building back good experiences since. Lars got to socialize with Jenn, my wonderful class assistant Thursday night, where he accepted treats from her and wasn't tooo anxious standing with us on the sidewalk. (Jenn is brilliant about body language too, and she knows to stand without leaning over him, and not make eye contact as she offers a treat. I just ordered Canine Body Language by Brenda Aloff on her recommendation.) 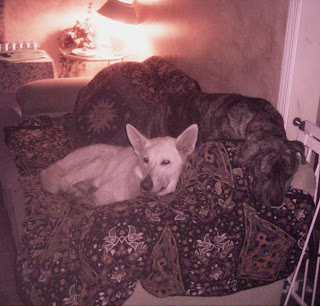 On Friday we got in more good socialization with a visit from my neighbor Liz. Lars was a bit anxious and jumped up when she came to the gate, but we walked together and soon he was calmly walking with her holding his leash. She then walked him alone and reported he was calm and happy!
We then had a visit from my friend Simone, who taught us some more on T-Touch and how to use it to calm anxious dogs and help them feel more grounded. He seems to love those relaxing circles.
Lars has been bred to be very attached to his own human, and to defend his home and hearth from most others. He's doing a great job, and just needs to learn that he can relax the rules a bit with most people!
By Kirsten (peacefuldog) at July 03, 2010 No comments: