Imagine, if you will, a <900 square foot 2-bedroom house with 4 dogs, 2 budgies, an anxious talkative Swiss ballet dancer, 4 days of construction work with all kitchen appliances in the living room and 3 very gregarious, non-English speaking contractors (by the names of Jose, Mauricio, and Oscar, in case that helps the imagination) carrying large objects around, and an anxiety-prone late 30-something dog trainer nonprofit worker confronting the reality of still not having adoptive homes for 2 of the said 4 beasts many months after they joined this bizarre family.
Imagine two of said 4 dogs engage in snarling fits whenever one looks cross-eyed at the other, that another of the 4 is 75 pounds of ecstatic muscle and unrestrained jubilance, and that the fourth is a beloved senior dog who wants nothing more than to lie in the sun and growl at passersby.
Now imagine that all this takes place during the week before Christmas, when the parents of said dog trainer are leaving their ill-tempered dreadlocked Bergamasco, Dizzy, to stay for a few days, concurrently with a visit from said Swiss guy's non-English-speaking Swiss friends, one of whom is terrified of dogs, who will stay for a week. You now have a fairly complete picture of why said dog trainer has been a gibbering mass of nerves, anticipation, guilt, and dread.

A visit from a potential adopter tonight brings hope of a saner world to come. Lars put his best foot forward, quite literally, when he came right over and put his paw on the man's knee. Once the cheesy snacks started coming, Lars did not leave his new friend's side but happily offered sits, downs, rollovers, and numerous paws, then just sprawled out on his side at the man's feet and relaxed.
The experience reminded me how we all, dogs included, have a potential for peace and well-being inside us that we often just need the right helpers to realize. This holiday I'll be toasting to us all finding the right helpers. 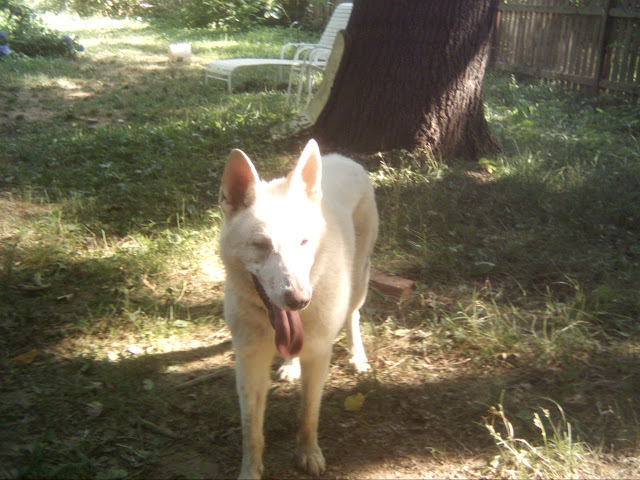