Now that the blood has been cleaned up off the bathroom floor, the scars have mostly healed, and Fozzie and Sandy are playing and romping about happily together again, I think I have enough perspective on the whole thing to tell the story of Fozzie and Sandy's recent not-so-playful interactions.


One recent night I took the three dogs for a walk, as I had been doing uneventfully, and turned around sooner than usual as I was in a bit of a hurry. Fozzie and Sandy, frustrated by the inability to continue on their sniffing way, proceeded to attack their respective leashes with a vengeance, which vengeance they then transferred to each other. 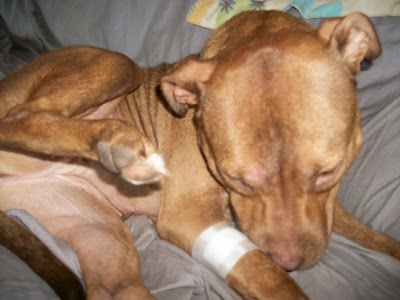 A harrowing several minutes later, my voice hoarse from screaming and with the help of two neighbors, we were able to extricate a slippery, blood-soaked Sandy from a trembling, huffing Fozzie and walk them up the hill to my house (I wasn't sure how best to thank them, but those neighbors got a care package with some organic soaps, energy bars, and sparkling beverages the next day).

From the way they had gone at each other, I was sure there would be some hideous damage. But when I got them into the house and got Sandy into the bathroom, I was amazed to find that things weren't too bad. Some nasty lacerations and punctures around her neck, and a little chunk missing from her ear. Fozzie, as you might expect after a tall dog has a tiff with a short dog, had some decent gashes on his front legs. Nothing that couldn't be treated with some hydrogen peroxide, bacitracin, and hot compresses.


This was actually the second of two tiffs between these two. A few nights earlier they had laid into each other when they were both on the bed and a bone was nearby, and a day later they got into it in the backyard over a stick. 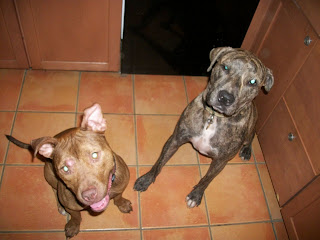 I also learned that Sandy, while she is generally well-disposed toward other dogs, has a tenacity that makes her difficult to extricate once her arousal crosses the line.

My real worry is that through having these experiences, Sandy learned to fear and be reactive toward other dogs in a way that she didn't know before. If I could have been a better foster parent, she may have had this predisposition but might never have learned this way of being.

Fozzie, I don't worry about so much. He's 2 1/2 years old, he's been snarled at by Lamar for the past two years, and seems not to have changed one bit--in either direction--in his responses to other dogs. 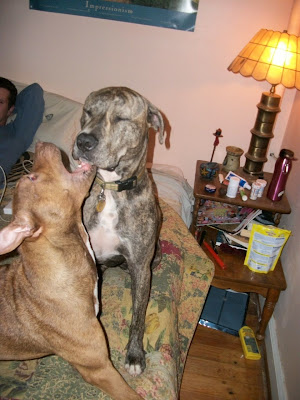 I worry about the long-term consequences of not being able to give my foster dogs the best, most protected experience possible.

But the reality for these dogs is that I am the foster person available to them at this time. And although these experiences were some of the worst I've had in a while, I didn't consider finding them another foster home or placing them in boarding (although I have redoubled my efforts to look for their forever homes). Though at times it fills me with stress, anxiety, and regret to have such high-maintenance foster pups, most of the time it is still rewarding to have around these complex little beings and to figure out how to do better by them while keeping myself sane.

The good news is that they are back to playing and romping and chewing on each other happily. I am interrupting the antics when they start to get louder and more intense, but the glee with which they greet each other seems to have returned to what it was.

I so admire that resilience, that deep-seated good nature in these dogs.
Keeping their play at a more mellow level is surprisingly easy. When I interrupt them, they look at me with what looks like relief--like they're glad for the assistance in avoiding another painful altercation.


I realized a long time ago that the threshold at which I stop being completely calm and able to juggle things comfortably is two dogs, and if I take on more than that I will inevitably not have enough time or attention left over to do every little thing by the book every minute.
But as I've thought with every foster dog and think now, being cared for imperfectly for several months is better than being dead. And I'm glad these two are alive, imperfections and all.
By Kirsten (peacefuldog) at December 02, 2011

Email ThisBlogThis!Share to TwitterShare to FacebookShare to Pinterest
Labels: Fozzie, Sandy, Why foster?