I recently had a session with a dog who went through my training class earlier this year. He's a young Wheaten terrier mix puppy who had been with his current owners from a young age, and had always been an exhausted puppy owner's dream: calm, quiet, and obedient, he sleeps a lot and is hard to get excited about much of anything. This, in fact, was his peoples’ main complaint: they had gotten a puppy in the hopes of having a playful, excited companion (like many of the puppies we know). He's been diagnosed by his vet as "just a boring dog."
He had always been reluctant to go on walks, but lately he's been more and more scared outside. Whenever they get to a busier part of their neighborhood, the dog stops and shakes and ducks and won't go further. He's uninterested in treats and just hides between his people's legs and wants to go home. 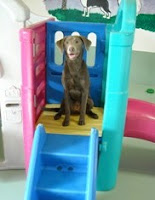 Since this very nice couple has had this dog since puppyhood, it’s hard to say what has caused his issues. I did notice that even when we were close to the places that normally make him shut down, he took treats readily from me. And when we went back to their apartment and worked on some tricks, this dog was the epitome of driven: offering spins and high fives and push-ups, wagging and wiggling, looking at me with a sparkle in his eye.  His Dad told me that when they were in my class, it was the most happy, lit-up, and energetic he’d ever seen the dog.
This is not to toot my own horn, as I know that this couple give the dog plenty of love and they are certainly putting energy into addressing his needs in the best possible way. But maybe this is just one of those sensitive souls who needs to be given extra encouragement to realize how wonderful he really is. Maybe he needs to go to agility classes, learn some tricks, and be talked to regularly in bursts of happy goofy falsetto song (the way I often did when this dog was in my class). Maybe he needs to go to a different vet who can help him see how exciting life can be, rather than dismissing him as boring. Maybe then a whole new world would open up for him. 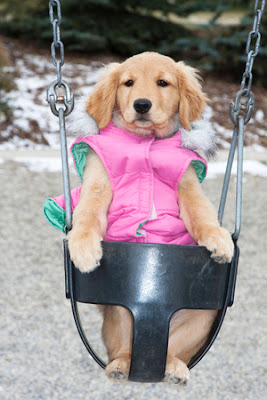 I left my clients with a prescription to play more, to use higher-value treats in the scary places, and to avoid forcing the dog to go on walks when he really doesn’t feel like it and instead to do fun, mentally stimulating, drive-building tricks and games inside.
To use the kiddie playground their condo provides for the human kids to teach their puppy to be a canine kid and have fun. To build confidence by getting him to climb on things, put his paws on novel objects, walk on strange surfaces.
And above all, to believe in him and love the dog they have.
Because if we all had the dog we want, we'd miss out on all the fun of working with our little friend, through absolutely positive methods and a healthy dose of creativity mixed with compassion and empathy, to get in touch with his inner puppy and become the fun-loving, responsive, confident, devoted, and adventurous companion everyone wants.