Recently I got an email from the head trainer at the shelter asking me if I might take in a tough case as a foster dog. Star was a bit of a celebrity, having been in the papers after she jumped in the window of a police cruiser stopped at a red light. The officer, stunned but laughing as he submitted to a furious facewash, called Animal Control and Star was taken to the shelter. 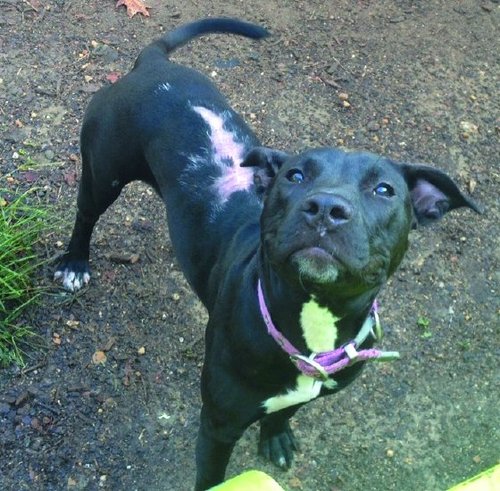 Despite her high energy, it did not take long for her to be adopted as she loved people and was only about 6 months old. But she was returned after her adopter reported she became very defensive, barking and lunging, when she was sternly reprimanded for chewing on a rug. 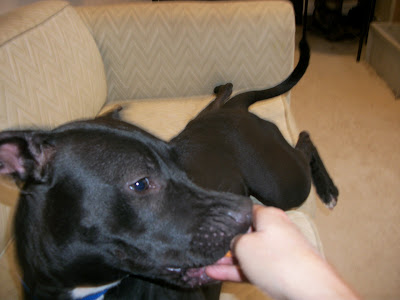 Star had a big, raw wound on her back, and it was clear that wherever she came from, she'd gone through some rough times. Either she was abused in a previous home, or she had a really bad accident while she was running around the streets. Either way, she had reason to be frightened at the first sign that someone might hurt her and she had little tolerance for any hint of harshness.

Star needed time with someone who would be sensitive to her sensitivity. I couldn't in good conscience bring her into my household, where she could get into all sorts of trouble with my own behaviorally challenged dogs, but I did commit to working with her at the shelter whenever I could. 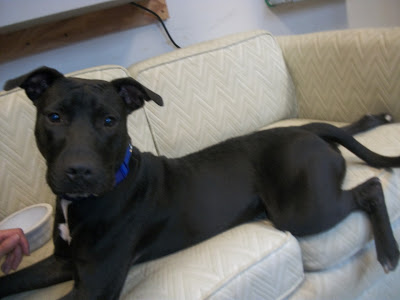 In the little room where I brought her, she immediately started jumping up on me and going after my scarf, hat, and hands. It took some doing to get said objects out of her mouth, which I had to do just by prying it open and then replacing the items with treats.


She did love the treats and seemed to relax as soon as she saw that she could work for them.  She knew her Sit and did it pretty readily when asked, but she got frustrated quickly when I tried to get her to Wait. She picked up on Down quickly and once she got into that, she seemed to relax. She calmed down overall as we worked together, but if I stopped asking her for behaviors and let down my guard for a moment then she was back to launching up on me, mouthing my hands, trying to steal my gloves and hat and scarf. 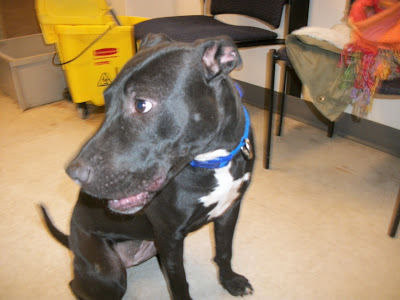 When I turned my back for a moment, she went after my stuff that I thought I'd put out of reach and I reflexively said "uh uh!" Her response was to jump at me and start intensely mouthing again. I wasn't exactly scared, and she focused and calmed almost immediately when I whipped out a treat and asked for a sit. But you can imagine that this behavior is not something most adopters will be thrilled to discover.

I took her for a walk, using my metal leash since I'd already learned that anything chewable near her mouth will end up inside it, and she relaxed once outside the confined indoor space. She didn't pull badly on the leash, and looked up at me sweetly as we were walking. When I gave her treats for walking nicely, she took them more gently. Whenever we walked past another pedestrian, she wiggled happily and wagged and wanted to greet like a typical happy puppy. 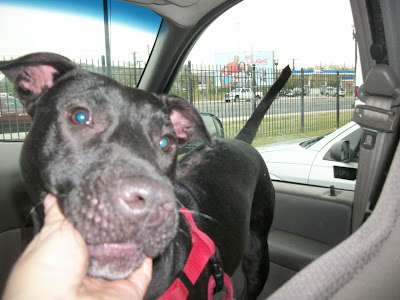 At one point I stopped to connect with her and pet her, which was more than she could calmly handle.  She got really excited again, jumping up, mouthing my hands, trying to rip my clothes. Good thing I still had treats! I sprinkled them on the ground and she settled down, and we were able to proceed.

Star is the clearest argument I have seen yet for positive training. Here's a dog with some pretty significant behavioral issues, and I could just imagine someone coming along and trying to show her he's "pack leader" and producing a dog who not only has mouthy impulsive issues but has been labeled "aggressive" or has a bite history and needs far more work to rehabilitate. Her "aggression" is 100 percent the result of fear which is the result of God knows what happened to her, and will need gentle, positive, treat-filled treatment in order to abate. 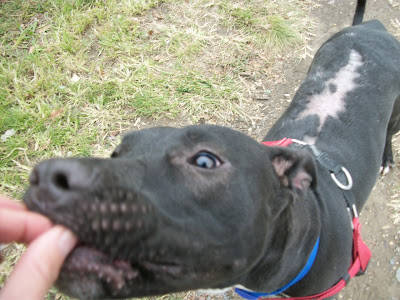 I hesitated to even write this post because this is the first dog I've worked with where I've had some doubts about the prognosis. What if I post about her, and get all you guys attached to her just like I am, and then the decision is made to euthanize her?

The shelter for now is committed to continuing to work with her--with all she's been through, they want this story to have a happy ending! She is certainly not an easy dog, but I do feel that at her age her potential to turn around, mellow out, and learn better coping mechanisms is huge. She's super treat motivated and loves people, just needs to learn calm behaviors and better ways of coping with stress. 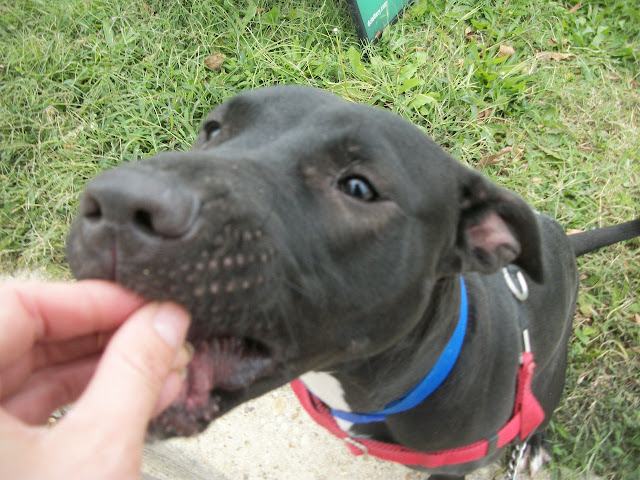 I'll keep you posted as I work with her, and if anyone knows of an incredible patient person who really wants to adopt a high energy celebrity pittie mix who's had a rough life but whose love for humans is undiminished, or has any ideas about how to help her in case the shelter decides it can't, please let me know!
By Kirsten (peacefuldog) at November 12, 2012